For more than a quarter of a century beginning in the very pioneer days of radio, the voice and guitar of the one-legged Texan songster “Peg” Moreland radiated through the airwaves from Dallas across the United States.  The Southwest’s best answer to the Bradley Kincaid-type song-collecting, guitar-toting folksingers from back in the eastern hills, his music was beloved by thousands of listeners, young and old.  Yet decades after his last sign-off, Moreland’s once-venerable reputation has been relegated to little more than a footnote in the annals of country and folk music history, with scholar Bill C. Malone going so far as to opine that his life “may never be properly documented.”  But with a broad and compelling repertoire said to have consisted of thousands of “witty ditties,” all delivered in his clear and pleasant Texas drawl with a snappy guitar backing that matched or exceeded the average folk songster of his day in instrumental skill, surely the “King of the Ditty Singers” is deserving of a renascence.

Jackson Arnot Moreland was born on a Saturday, October 29, 1892.  Early documents indicate that Arnot—his mother’s maiden name—was originally his first name, but he gave it in the order as above for the duration of his adult life.  His birthplace of Rienzi, Texas, was a tiny community that you’re not likely to find on any map, located roughly halfway between Abbott and Malone in southeastern Hill County, which dried up not long after the turn of the century.  A blond headed, blue eyed boy of Scotch-Canadian descent, he was the fourth of nine children born to farmer Samuel Jackson Moreland and his wife, the former Mary “Mollie” Arnot.  In the middle of the first decade of the twentieth century, the entire Moreland family up and moved by covered wagon to the Panhandle Plains, settling in the burgeoning town of Canyon, where Pa Moreland operated a grocery store with his brother William, until the former’s untimely demise on April 8, 1908.  Jackson Moreland graduated from high school in Canyon, and the family grocery business provided him with his first job, though it would be far from his last.

The young Jackson’s appreciation for music blossomed at an early age.  Growing up on the prairie, he was immersed in the rich musical tradition of the cowpunchers and ranchmen, and reveled in its grandeur.  He picked up entire songs for life in his remarkable musical memory, ultimately amassing a mental collection of reportedly more than two-thousand lyrics, including cowboy ballads, traditional songs, minstrel numbers, and modern pop songs of the day.  He would later note emphatically that he was not a songwriter himself, but rather more of an arranger; the extent of his composing was limited to filling in gaps in his memory and editing lyrics to better suit his taste (though, in all likelihood, some of his “arrangements” were likely so extensive that they could nearly qualify as originals).  As a youth he played in the Canyon Municipal Band, doubling on piano and reeds, but quit after the bandleader demanded that he triple on oboe.  Some time later, he took up the guitar to entertain a friend who was convalescing from a college football injury, learning to play the instrument in a distinctive ragtime-influenced style utilizing a celluloid thumb pick to nimbly pick out intricate melodies on the lower four strings, interspersed with strummed chords to keep up rhythm, and often employed a capo to adjust the key of his songs to better accommodate the pitch of his tenor voice.

Prior to the First World War, Moreland served three years in the Texas National Guard, holding the rank of Corporal at the time of his discharge.  He subsequently occupied himself in a number of different professions.  One of these included joining his older brother Albert in working on the railroad, securing employment as a brakeman on the Santa Fe, a career choice which would cost him the better part of his right leg (though in later years he would jokingly attribute the amputation to “shark” or sometimes “two sharks”).  Thereafter he adopted the nickname “Peg” (occasionally styled as “Pegleg”) from the wooden apparatus that replaced the absent appendage.  He later claimed to have worked as a cowboy, but—aside from an honorary membership in the West Texas Veteran Cowboy Association—this was likely more of a publicity move than it was backed by any significant truthfulness.  Back home and not quite able to continue in the strenuous life of a railroad man, Moreland campaigned for the position of justice of the peace in Randall County, winning election in 1921 by singing and playing his guitar for prospective voters.  During his three-and-a-half year tenure, he claimed to have “married hundreds of ’em, and none of ’em ever came back to get it undone.”  He eventually became fed up with the constabulary job, and left his post in 1924 to move with family back eastward to the Big “D” in search of new work, with considerations of pursuing a law career, but preferring one in which he could “make a living without working.”

Soon after getting settled, “Peg” Moreland made his radio debut as a walk-in applicant, at a time when radio in Fort Worth-Dallas had been “on-the-air” for less than five years.  Reports differ as to whether his first broadcasts were made in 1925 over the Dallas Morning News station WFAA—with whom he was most strongly associated—or if they were preceded by an appearance on the neighboring Fort Worth Star-Telegram‘s WBAP in the year prior.  Either way, he immediately made a hit with the listeners, who responded with exuberant fan mail.  Unfortunately for both the singer and his fans, the station lost his calling card, and none of the staff could remember his name.  In the mean time, with no more steady radio work available at that time, Moreland had returned to the Santa Fe Railroad to work a short stint as a mail clerk on the Arizona run.  WFAA eventually managed to track him down and bring him back to the air lanes to stay in 1926 or ’27, becoming—by some reports—the first full-time musician on the fledgling station’s staff.  Early in his radio career, he was dubbed a “cowboy bard” and “barnyard tenor,” among other assorted appellations, but the nickname that finally stuck was “King of the Ditty Singers”.

END_OF_DOCUMENT_TOKEN_TO_BE_REPLACED

In my spare time, and when the thought occurs to me, I enjoy browsing the Digital Video Repository of the Moving Image Research Collections (or MIRC) at the University of South Carolina, a vast online archive of historical film footage, much of which consists of newsreels footage.  Often, I’ll just enter some different search terms and see if I can find anything interesting.  It was on one such online excursion that I stumbled across a newsreel (or rather outtakes thereof) depicting the arrival of the famed humorist, movie star, and cowboy philosopher Will Rogers in San Antonio, Texas, that caught my attention.  I am (as any red-blooded American surely must be) counted among Will Rogers’s legion of admirers, but his presence was not what attracted my interest to the video.  Rather, it was the appearance of a background character that struck me as a familiar face.

END_OF_DOCUMENT_TOKEN_TO_BE_REPLACED 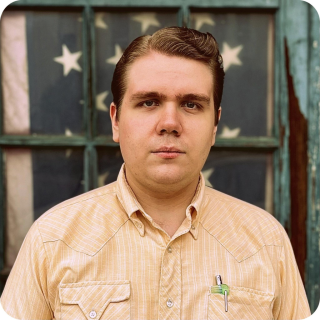 R.C.M. Around the Web